The DIY Survey 2021: old versus young

House prices in the UK are rising fast. It was reported that prices have increased 13.4% in the year to June, adding an average of £29,029 to each property. This is the highest level the UK has seen for 17 years, forcing younger generations to find new ways to afford their properties.

One solution to the housing crisis is to invest in a “fixer-upper” – a property that requires work to make it a home, whether that be ​redecoration, reconstruction or redesign. By taking on these tasks, homeowners can buy cheap and then significantly increase the value of their property.

With this in mind, Plastic Sheets Shop has surveyed 1,000 UK homeowners to discover how they truly feel about the DIY work required when taking on a fixer-upper. Are younger generations up to the challenge of sprucing up their properties? Find out below.

Building and plumbing tasks most intimidating 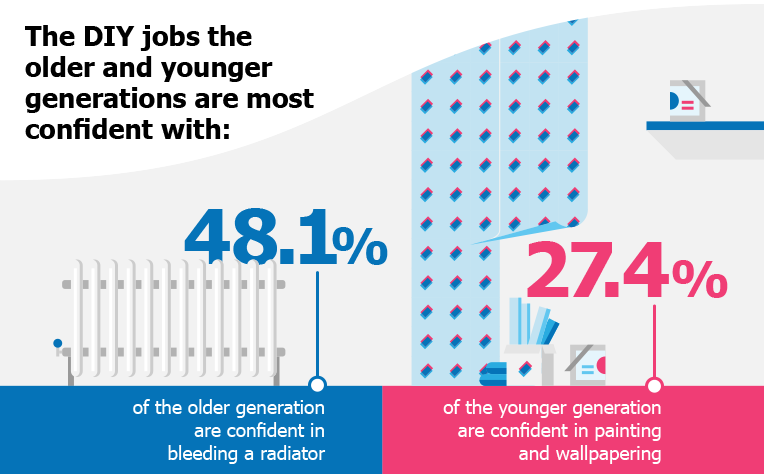 We asked our respondents about how confident they feel completing specific DIY tasks, including complex plumbing, fitting a new kitchen and putting up shelves.

Perhaps unsurprisingly, the task that garnered the most confidence is bleeding a radiator, with 35.8% of respondents feeling ‘very confident’ about completing this task. Painting or wallpapering a room was also seen as a breeze, with 28.6% answering ‘very confident’.

However, the idea of building an outbuilding is quite daunting for many, with 42.1% of people saying they are ‘not at all confident’. The second most daunting prospect is complex plumbing tasks, with 40.7% stating a lack of trust in their abilities to upgrade their bathroom.

Younger generations have confidence on their side

When comparing our results by age group, there are several tasks that the younger generations feel more confident about completing.

Building an outbuilding
The older generation is, once again, far more intimated – 58.6% say that they have no confidence and just 6.8% claim to be ‘very confident’ in taking on the task. In comparison, only 6.2% of 18-24-year-olds are ‘not at all confident’ while 17.7% feel certain about their abilities.

Confidence levels are significantly higher in the younger generation when it comes to taking on these commonly tricky tasks. It’s unclear whether this self-assurance is justified – perhaps fewer years of DIY experience simply means fewer instances of DIY disasters.

However, the older generation isn’t completely left behind when it comes to DIY confidence. For example, 40.7% of 55-64-year-olds are ‘very confident’ about painting and wallpapering compared to only 27.4% of the younger respondents.

Putting up picture shelves and completing exterior work, such as clearing gutters or cleaning windows, also instill more confidence in the older generation, with ‘very confident’ garnering 29.6% and 32.1% of the vote, respectively. In comparison, only 20.4% and 19.5% of 18-24-year-olds said the same.

The top task for the older generation – that is, the task most of them feel confident about – is bleeding a radiator. 48.1% said they feel ‘very confident’ versus just 14.2% of the younger group.

Public embrace DIY due to lockdown

While attitudes towards DIY vary between age groups, it appears that lockdown has had a significant impact on all generations. When asked what has recently encouraged them to take on DIY tasks, the two most popular responses concerned lockdown:

Our survey results also reveal that 35% of people are more confident with DIY since lockdown – only 14.9% say they have lost confidence. However, it is the younger generation that has seen the biggest surge in confidence, with 58.4% reporting a rise in confidence, compared to only 25.3% of 55-64-year-olds. The first time buyer demographic offers almost as much confidence as the youngest generation, with almost half (44.8%) saying that they have become more so during lockdown.

While 39.9% of our respondents attempted more tasks during lockdown, the older group were less keen or had less time on their hands to devote to DIY:

However, the easing of lockdown has not encouraged many (8.4%) to seek the help of tradespeople. So, despite many picking up DIY as a hobby during a period where everyone has spent more time at home, it seems these newfound skills will be sticking around.

(Don’t) do-it-yourself: calling in the professionals

When doing DIY, you need to know when to hire an expert, which should ideally be before making a costly mistake. But how do homeowners feel about getting help from tradespeople?

Findings from our survey show that 46.9% of 55-64-year-olds reported that they are willing to pay for an external professional to get the job done properly – three times more than the younger generation (14.2%). However, 18-24-year-olds are more likely to get help from the experts because:

For 25-44-year-olds, they’re most likely to pay for a professional because they too want the job done properly. However, only 33.5% are that way inclined. The second most popular reason for turning to the professionals is lacking the confidence to do it themselves, which 29.9% feel.

Results say to leave the plumbing to the plumbers

All the older, younger and fixer-upper generations selected plumbing installation as one of their top jobs to leave to a professional. 43.4% of 18-24-year-olds opted to avoid this task, while for 25-44-year-olds it was a staggering 65.05% – making it both their most elusive DIY task.

For the 55-64-year-olds, 80.2% would leave plumbing installations to the experts, making it the second-highest result for the age group. Beating it to the top spot is building an outbuilding, with 85.8% of the older generation calling in the contractors.

The second most popular choice for the younger generation was yet more plumbing work. 38.1% say that they’d leave minor plumbing, such as fixing leaky taps and blocked drains, to tradespeople, rather than attempting to fix them themselves.

Sometimes a DIY task seems simple at first but is inexplicably difficult. At these moments, a bit of advice is often all that’s needed. But where do people go for DIY information?

When they’re not sure what they’re doing, our younger respondents are most likely to turn to social media for DIY advice (37.2%) or ask their parents or friends (25.7%). 30.15% of our fixer-upper generation would also rely on social media, followed by 27.1% turning to Google.

The older generation is more likely to go to Google (34%), followed by social media (28.4%).
It would appear that this digital generation is largely seeking DIY help and advice online, with almost one third (30%) turning to social media, such as Youtube, Facebook and TikTok, and a similar number (27%) using forums and articles on Google – totalling 57% of respondents.

For all groups, the web is clearly a blessing – and there’s usually plenty of guides to be found for any troublesome DIY activity.

DIY legalities – what does the UK know? 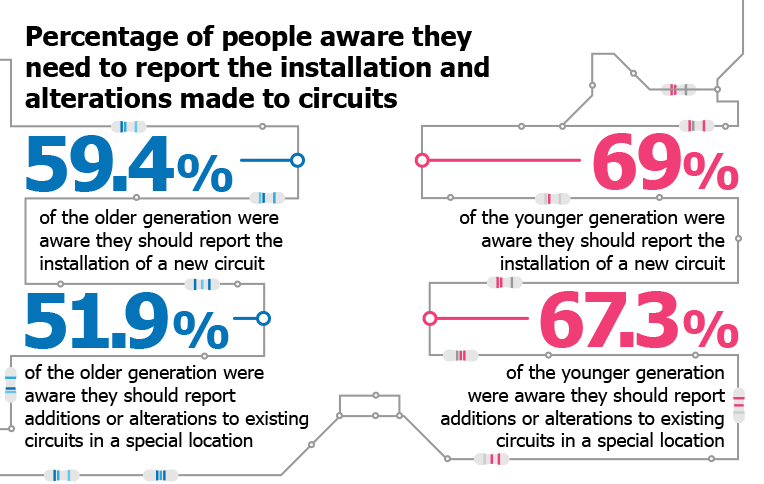 If you are planning to take on a DIY project at home, there are regulations that you must know and adhere to. From our survey results though, it seems not everyone knows as much as they ought to.

For example, the majority of people (67.4%) are unaware that they need to report the installation of a garden watering system or a bath that holds more than 230L of water (66.6%). In both circumstances, it is the younger generation that is the most in the know:

Thankfully, the majority of both younger and older generations were aware they had to report the installation of a new circuit; additions or alterations to existing circuits in rooms with baths, showers, saunas and swimming pools, and; the installation of gas appliances.

That said, the younger generation was, once again, more up-to-date with their knowledge:

In contrast, 55-64-year-olds were more likely to be aware of reporting a replaced consumer unit (the electrical box with the mains and circuit switches) although there is little in it: 66% versus 64.6% of 18-24-year-olds. There was also only a slight difference between the older and younger age groups when it comes to gas safety checks when installing a gas appliance: 70.8% of the younger generation and 69.1% of 55-64-year-olds know about the legalities.

From lockdown languishing to lifelong learning

When it comes to DIY, younger and older people have different aptitudes, expertise and preferences. It is clear, though, that lockdown has driven a rise in home improvement activity across the UK, boosting the confidence of many budding DIYers – and with resources available at everyone’s fingertips thanks to social media and Google, it seems as though most people won’t be giving up their new skills.

What started as a way to fill time during the boredom of lockdown could grow to become a set of valuable life skills.

If you require plastic for any of your DIY tasks, get a quote today! Not sure exactly what you need to complete your project? Get in touch: we are happy to advise you, completely free of obligation. Contact us.

View all blogs
Share this article
Our articles
plastic
sheetshop.co.uk

Which materials do you want to glue together?